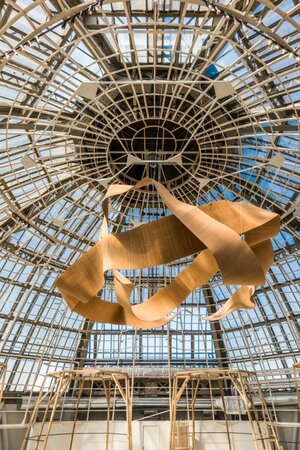 Printemps unveiled a new floor dedicated to sustainable fashion, reflecting growing competition among French department stores to attract environmentally minded consumers as they seek to compensate for the continued absence of Asian tourists. Located on the seventh-floor space and called ‘Septième Ciel’ (‘Seventh Heaven’) the 1.350m2 (14,000 sq ft) new floor opened with a mix of brands including alteration service Tilli; vintage retailers Relique and Nuovo; sneaker care and customization service Docteur Sneaker; second-hand children’s clothes retailer Bonâge, and a selection of upcycled and recycled items from the Printemps-owned online homeware retailer Made in Design.  To mark the launch, the store tapped Amélie Lengrand and Sophie Paumelle of Atelier Laps to create window installations featuring giant ribbons made of bamboo fiber, one of which also hangs under the building’s second glass cupola, which has been restored to house a space with eight pop-up stores that will rotate every two or three months. Built in 1910, the Binet cupola was dismantled during World War II, and its original stained-glass panes were subsequently lost in a fire. The space was later used as a staff canteen and an auditorium, its glass-and-steel roof obscured.  A central table will offer products ranging from Kintsugi ceramic repair kits from Dutch brand Mora Approved, to organic tampons and sanitary pads by Flo.

Next door is the Pont d’Argent, originally built in 1933, home to the Second Printemps vintage offer. Previously used as a show space, then for management offices, it opens onto a terrace with panoramic views of Paris, including the Opera house and the Eiffel Tower. Furnished with recycled display units, and a mobile by artist Charles Kaisin consisting of 12,000 silver origami birds, the department is curated by vintage specialist Marie Blanchet, who has sprinkled the assortment with 20% of trending items, like ‘90s Prada nylon bags, and 10% of rare finds, including an Alaïa belt worn by Naomi Campbell. Printemps initiated a big communications push on Sept. 2 with the introduction of its own label, ‘Unis vers le beau responsable’ (“United for responsible beauty”), attributed to 400 brands that meet a selection of 22 qualifying criteria determined by a panel of independent experts.

CEO Jean Marc Bellaiche said it marked the start of an ambitious strategy. “Initially, we will take back a limited range of products, but the ambition is much broader. The ambition is that ultimately, we will be able to take back any product purchased at Printemps,” he said. “This process is only going to improve.” Group sales between June and August were up 30% year-on-year, but down 16% compared with 2019, considered a more reliable benchmark year due to the disruptions caused by COVID-19. Revenues from local customers were up 12% during the period versus the corresponding period in 2019, while digital and omnichannel sales tripled. In the last months, Printemps introduced dedicated spaces for gifts, athleisure and games; rolled out its e-commerce site printemps.com in the U.K.; launched live shopping, and increased its program of in-store events. It plans to merge the printemps.com and printempsfrance.com websites, and revamp the site for its fashion e-commerce site Place des Tendances. In October, it will extend its Printania loyalty program to overseas customers, before introducing a new visual identity and brand platform next March. While plans to open a store in Milan have been scrapped, Printemps is scheduled to unveil its first overseas location in Doha, Qatar, in September 2022, just ahead of the FIFA World Cup, set to run there from Nov. 21 to Dec. 18, 2022.