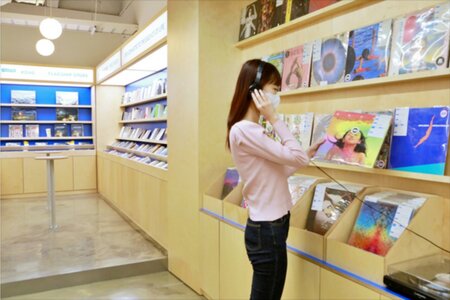 Lotte Department Store opened ‘Connected Flagship Store’, a multi-purpose experience zone on the first floor of its main branch in Myeong-dong, central Seoul, last Friday. With an independent bookstore, an art display area, a vinyl listening zone and a coffee shop, the space is targeting younger customers who are emerging as the next big spenders. Lotte Department Store has been developing projects offering a variety of services to consumers, with the aim of turning a department store from a mere shopping mall into a multi-purpose complex where shoppers can have fun and memorable experiences. Ground Seesaw Myeong-dong, a large media art gallery opened last year at the department store's main branch, is one example.

Lotte Department Store also opened Get That Shot Cafe, a hot spot for Instagrammers, at its Yeongdeungpo branch, western Seoul, and Edne by Towed, an experiential furniture and lifestyle store, at the Guri branch in Gyeonggi. Lotte Department Store plans to invest 547.6bn won ($450.6mn) in revamping some of its major branches, including the Myeong-dong branch, the Jamsil branch and the Gangnam branch. The Myeong-dong branch has been expanding its luxury lineups since last year. Luxury menswear section was renewed with some 30 brands last August, followed by the womenswear section, which reopened in March. The branch's food, accessories and cosmetics sections will go through a renewal as well, according to the Lotte Department Store. British architect David Chipperfield is currently consulting with the department store regarding the renovation of the Myeong-dong branch's first to second floors and the first basement level.