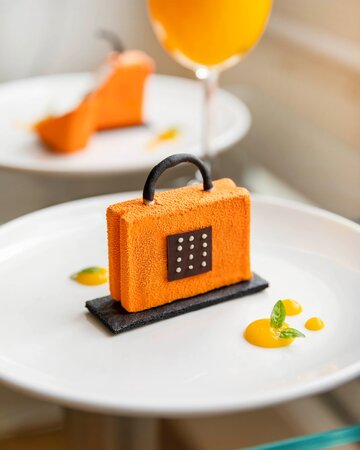 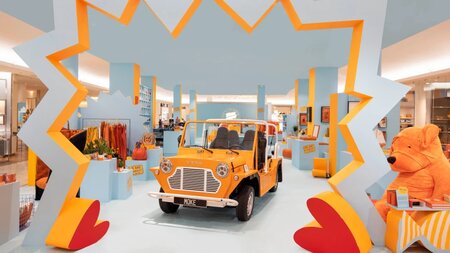 This year, Le Bon Marché Rive Gauche is celebrating its 170th  anniversary with a burst of colour, unleashing its signature orange colour throughout the store in playful pop-ups filled with exclusive limited-edition products. Visitors entering the Paris department store are greeted by an orange Mini Moke electric car with black seats, although with a price tag of €29,900 it can be customized in any colour. Further along is a ping pong table by Dutch designer Piet Hein Eek that will set you back just over €15,000, though customers have been enjoying the odd game on it for free. Brands including Acne Studios, Roger Vivier, Cartier, Chloé and Moynat have designed orange ready-to-wear, bags and shoes especially for the event. Animations include a La Fabrique à Popcorn stand and a coffee bar run by Le Café Nuances; a second-floor games space featuring a maze and a tombola; a Kure Bazaar nail art bar, a Kevin Murphy hairstyling station, and a makeup bar featuring a rotation of brands including La Bouche Rouge, By Terry and Bobbi Brown. But the highlight no doubt will be the weekly immersive theatre performance staged across the store on Friday and Saturday nights from Sept. 2 through Dec. 30. Some 30 actors will recreate the story of founders Aristide and Marguerite Boucicaut, which famously helped to inspire French author Émile Zola’s 19th century novel ‘Au Bonheur des Dames.’