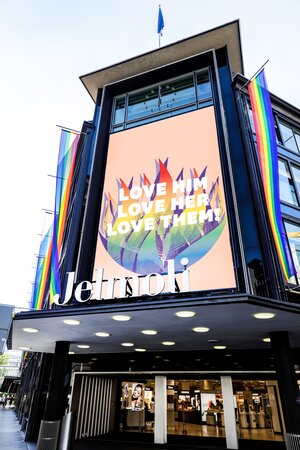 The Pride Month in June has become an important part of the city of Zurich. Although already lived throughout the year, Jelmoli is consciously celebrating diversity this month with various activities. With the claim ‘Love him, Love her, Love them’ interpreted throughout all of the shop windows and the hoisted Pride flags all over the building, Jelmoli wants to set an example. No matter where you come from, what gender, religion or sexual orientation you have - everyone is welcome at Jelmoli.

Jelmoli has traditionally associated itself with local partners. For Pride Month, Jelmoli works with Zurich designer Julian Zigerli and House of B. Poderosa. The colourful cosmos of this community is a lifestyle and at home in the world of vogueing and ballroom, whose origins can be found in New York in the 1970s. The members of Zurich's House of B. Poderosa took over Jelmoli by Night in an exciting film and photo shoot. The shoot focused on their bubbly personalities, cool looks from Jelmoli and the Special Pride Collection ‘Great Day to be Gay’ by Zurich designer Julian Zigerli, which will be available at Jelmoli throughout June.