Christmas Campaign 2020 at The KaDeWe Group 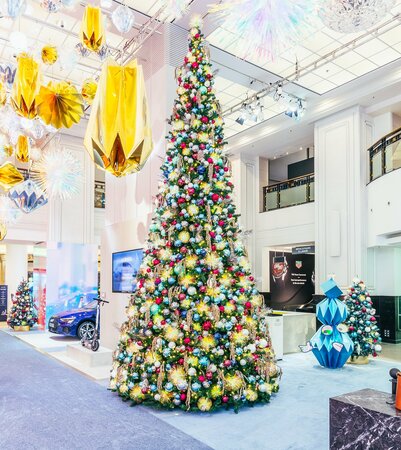 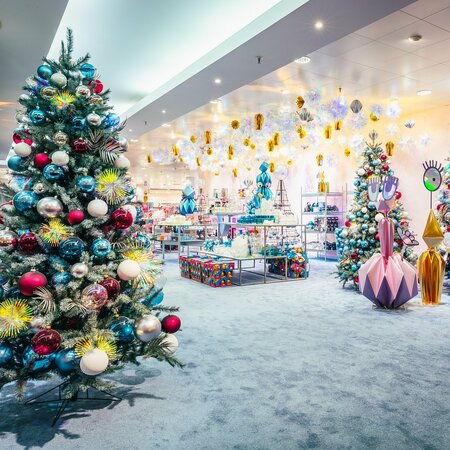 Alsterhaus in Hamburg, KaDeWe in Berlin and Oberpollinger in Munich are delighting visitors with a modern and futuristic Christmas concept named ‘A Cosmic Christmas’. In each of the stores, hundreds of Christmas trees shimmer in pastel colours and iridescent stars cast their spell on guests like foreign planets. In amongst all this, we encounter the star guests, the Cosmic Family, everywhere. The five members of the ‘Cosmic Family’ look like characters from a comic strip, but otherwise they are like almost any other family: the grandmother discovers new ideas in the ‘New Kitchen’ section and ‘The Sixth Floor’, the food department of the KaDeWe, while the mother's eyes light up, and not just at the beauty highlights.

Meanwhile, the father takes every opportunity to point out social distancing rules and hygiene etiquette: ‘On earth and in space: Take care and stay safe!’ Within the spacious stores, all the prerequisites have been met so that guests can experience the Christmas atmosphere safely and in a carefree way. After all, the greatest gifts you can have at Christmas are good health and Amazing gifts that you cannot buy.

The tallest Christmas tree in its over 110-year history, standing at 7.5 metres and situated in the atrium, will greet Berliners and guests to the KaDeWe. It took two days to build and is adorned with 1’500 glass baubles and 3600 LED lights. With the biggest Christmas tree, there is also a chance of winning the biggest gift in the KaDeWe Christmas competition: an intergalactic brand new Audi A3 Sportback TFSI e.

Due to the pandemic, many Christmas markets cannot take place this year as usual – but that is not the case at Alsterhaus, KaDeWe and Oberpollinger. Traditionalists and trendsetters alike can immerse themselves in the Christmas atmosphere at the various Christmas areas. At KaDeWe, there is a host of luxurious, fun, gaudy and classic items to discover on the fourth floor in a space of around 1’000m2. – the ‘Arctic Mermaids’ themed Christmas tree decorated with polar bears is a wonder in white and ready to be taken away immediately. Instagrammers can look forward to emoji baubles and glitter icons. Over 4’000 Christmas items provide inspiration and joy for decorating your home. From 4 December 2020, a number of small Christmas highlights will be taking place in all three stores and Santa Claus will also be making his rounds – in a Corona-compliant manner. The complete programme will be published on the store websites shortly.

The new edition of the KaDeWe food magazine, which celebrates the world-famous food hall in all its facets, is hot off the press. The magazine is complemented by the annual festive collection, which the KaDeWe delivery service team delivers directly to your doorstep. ‘The Sixth Floor’ itself has a festive feel to it with a large selection of advent calendars, delicious gift ideas and the première of the Christmas signature pastry from the KaDeWe festive collection. If you want to discover the secrets of the KaDeWe chefs for yourself, your best bet is the Gourmet Box you can cook yourself at home. There are three selected gourmet menus to choose from, each comprising three courses. ‘A Cosmic Christmas’ is also the story told by this year's Christmas window displays, the result of an exclusive collaboration with the fashion brand BOSS and New York artist Justin Teodoro.