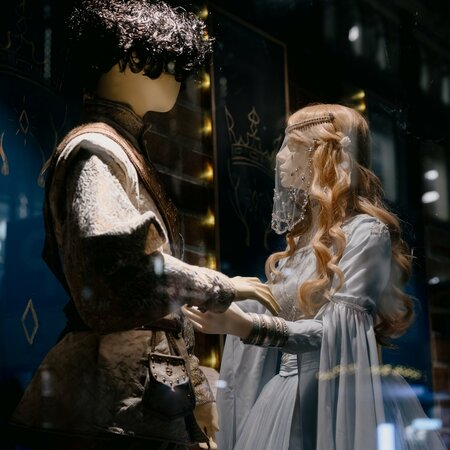 This year’s Christmas exhibition is dedicated to the remake of the magnificent Norwegian Christmas tradition “Tre nøtter til Askepott”, a different Cinderella story showing a young girl being empowered by three magic nuts to become a hunter, a princess and herself, a poor country girl. All of whom the prince falls in love with. Christmas windows are something Steen & Strøm takes great pride in: it is about giving back to the city and create magical memories for everyone visiting Oslo. Cinderella started to appear in the company’s windows in 1951, through a collaboration with Disney, and Steen & Strøm is very proud to have set now its focus on the Norwegian Cinderella.

In “Tre nøtter til Askepott”, we follow Cinderella in snow-heavy forests, and up on the sparkling Norwegian high mountains in her fight against her evil stepmother. To make the windows come alive, Steen & Strøm collaborated with Ray Atelier, which worked on the “Tre nøtter til Askepott” film and created as well this year’s exhibition. In the windows you will find familiar scenes from the film, everything from Cinderella's transformation into a hunter with a hat and feathers, to the preparations for the castle ball and discover the incredible costumes that were created for Cinderella's universe.